Abkhazia In A Nutshell

Sorry, Ab-where-ia? It's a breakway region of Georgia that has claimed independence and that various governments warn you not to visit, but read on. Cycling in Abkhazia is an unusual experience and will make you a member of a very select club. 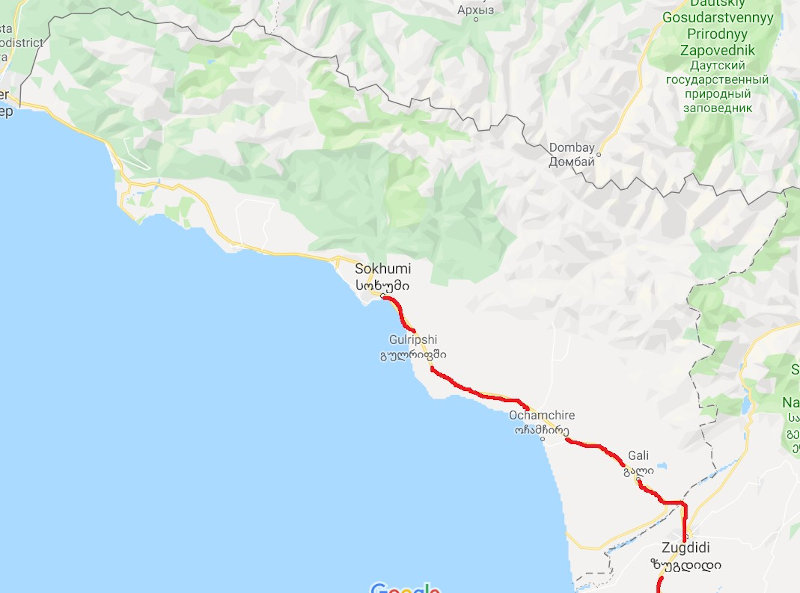 Bloody hell, where to start? First off, I don't want to actively encourage you to go cycle touring in Abkhazia but merely provide information if you're interested in going there. After all, the UK Foreign Office and the US equivalent both tell you not to visit under any circumstance.

Abkhazia was once the resort coastline of Georgia, with nice, Black Sea beaches backed by subtropical mountains. This all came to an end when the USSR fell apart and didn't improve later during a bloody war with Georgia in 2008. So why go there? Well, why go anywhere? Because it's interesting.

It's important to point out that I'm neither brave nor reckless. I did my research before cycling there and the risks looked small enough to be worth the visit. But you should do the same and make up your own mind. By wandering into the wrong parts of the country, people have come unstuck in fairly unpleasant ways.

From the reaction of the border guards, they don't get many cyclists passing through, although I found a blog for at least one fella before me. But plenty of non-wheeled based visitors come and go. Three middle-aged Portuguese school teachers were entering at the same time as I was. But the tourist flow is only a trickle. Georgians aren't allowed to visit, and given what has happened there in the past they'd have to be nuts to want to.

Legal entry to the region is a two-step process. You first apply online for permission to enter on a particular date. A few days later, assuming you gain permission, you will receive a letter via email inviting you. Make a few hard copies of this. Arrive at the Abkhazian border on the given date and show your letter. Beware:They will thoroughly search all of your bags and so avoid contraband. Once inside, you then need to visit Sukhumi, the capital, about sixty, almost entirely flat miles from the border, and buy a visa. It's only a few euros. You'll need this bit of paper to leave. Rather than go into all the detail here, the best resource for up-to-date information on the region and its visa requirements is Megan Starr's page.

Important: The safest way of cycling in Abkhazia is to enter from Georgia, returning the same way. Georgia doesn't recognize the region and so if you leave Georgia to visit Abkhazia and then proceed to Russia you will have problems on subsequent visits to Georgia for having previously left the country illegally. Likewise, if you cycle into Abkhazia from Russia and then continue to Georgia you will be arrested for having entered Georgia illegally.

Be careful if you look in any way different. There's at least one blog online that tells of a heavily pierced party who attracted unwanted attention from the conservative locals. I've no data on non-white travellers but Russia as a whole doesn't generally score too highly on this front.

No country has representation in Abkhazia and so if you get yourself into a mess, then you'll have to sort it out yourself. Good luck.

After cycling in Akbhazia, I would be wary of mentioning this fact to any Georgians. They are understandably unhappy about the situation and might not appreciate your thirst for knowledge or adventure.

Abkhazia is a lush, subtropical landscape studded with mostly damaged buildings for the first few tens of miles after the border. Nature is reclaiming what it can. By the time you reach Sukhumi, the place has mostly got its act together although road and pavement conditions still tell you that this is a desperately poor place.

Those distant mountains are really huge.

The effects of war

Although I didn't see them there is at least one huge cave complex in the hinterland. It's a beautiful, if troubled, place.

The seafront tries to pretend everything is alright, with a restaurant or two and a few snack stands. 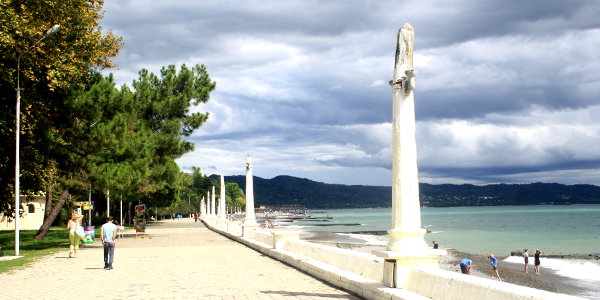 Abkhazia's main roads were surprisingly fine. Cows wander freely upon them, blocking traffic and generally not giving a fig. However, possibly because they see so few of us, my bicycle terrified them. The roads in Sukhumi were potholed messes.

Important: The currency is the Russian ruble. Since Georgians aren't allowed in Abkhazia and the only visitors in any quantity are Russians, then finding a currency exchange office might be tricky. Much better to take enough rubles in with you.

I only stayed in one place, a hotel in Sukhumi called Assir, the newest, cleanest-looking building in the city (which, if I'm being honest, isn't saying much, but it was lovely). The young woman on reception spoke English and a night in August only cost €17.50. 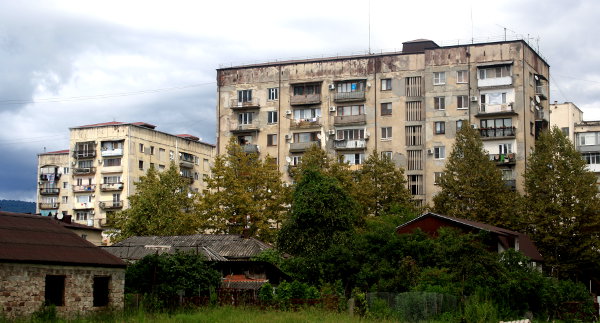 This was definitely not my hotel.

There is an Abkhaz language but everyone speaks Russian. Attempting to speak Georgian, if that is one of your skills, would be asking for trouble.

Georgia, although neighbours doesn't means friends in this case, and Russia, both physical neigbours and financial sponsors.

Reasons To Go To Abkhazia

An interest in post-break-up Soviet history, natural beauty, the thrill of doing something you're not supposed to, living as close to the edge as Europe allows, because no one does, because you're writing a book about independence-seeking regions (that's just me then).

Where Have You Written About Cycling In Abkhazia?