Albania In A Nutshell

Cycling in Albania is fun. The country feels like a sci-fi dystopia in which the populace tries to survive in a world without health and safety legislation. Albania isn't a nanny state; it's a dangerously-unstable-uncle-with-a-gun state. But that's the reason to go. It all feels nicely mental. Every day will provide you with something just a little bit weird.

Where and When I Went To Albania

Albania is an amazingly beautiful country to cycle around although you don't have to get very high up before the hillsides start to feel desolate in a way that they don't in the countries that border it. A strange haze hung in the air from the Macedonian border to Elbasan. It was too early in the day for heat haze. I can only assume it was pollution. Watch out for the dogs too! 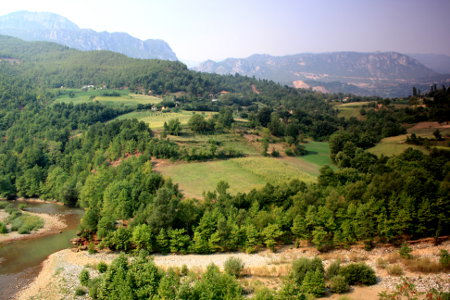 There has recently been a road improvement programme, particularly for Albania's main roads, but many of them are still a bit ropey. You can still find stretches like this away from the bigger roads. 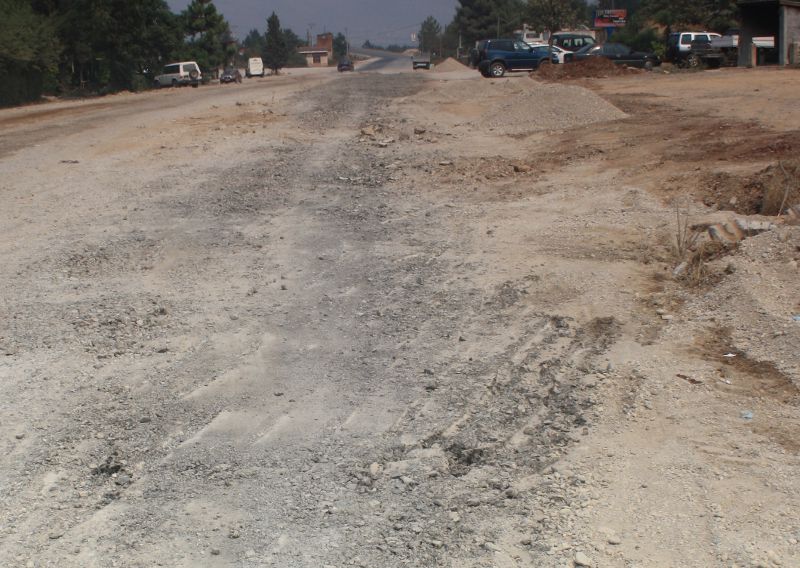 Albanians seem to thrive on danger. The main road north out of Tirana had the width and traffic of a British motorway but without any road markings or a central reservation. To add to the excitement, all the manhole covers had been stolen. One of the holes was large enough to lose a Mini and, obviously, there were no warnings of any kind. Only a stuntman with a deathwish would want to travel at speeds faster than those of a bicycle.

The biggest problem is that the roads aren't up to the increasing traffic. The road below, about the width of a British country lane, is the main road from the city of Elbasan to Tirana. It's basically the country's M1. 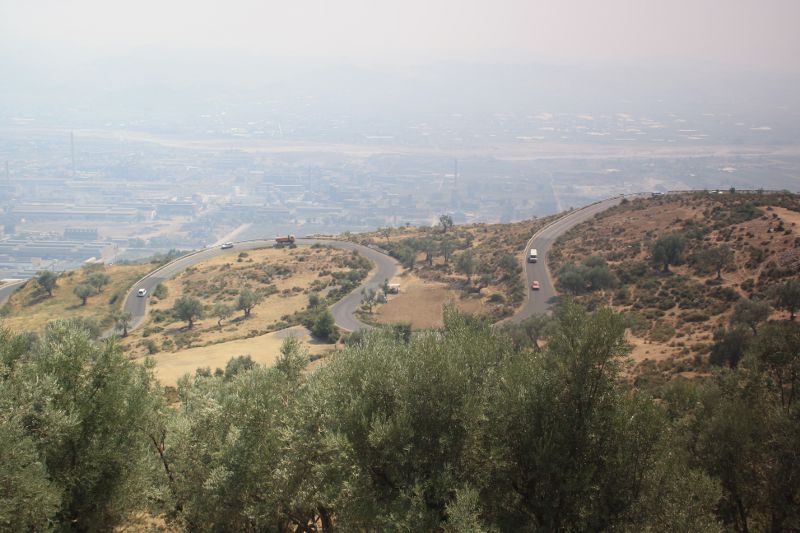 Traffic is fast (where it can be) but, probably because you're an oddity on their roads and Albanian drivers are used to dealing with horse and carts, you'll get a wide berth. Drivers do like to give you an annoying blast of their horn before overtaking.

I stayed at two hotels. A basic room in Tirana cost €20 whereas one in the Hotel Rozafa, a wonderful concrete communist monster in Shkoder, cost €15 and included breakfast.

Food was cheap and if you avoided the swish bit of Tirana - 'swish' is relative here - beer was cheap too. In a backstreet bar in Shkoder I paid €1.20 for a half litre of beer. From a takeaway across the road a whole roast chicken and a giant trayful of spuds - look, I was hungry, alright? - only came to €3.20.

In all likelihood you'll cycle through Albania in a few days and so it may not be worth the effort to learn much of the language. As Albania was formerly occupied by Mussolini, a useful fallback is Italian. It's certainly more useful here than English.

You have lots of options for onward travel from Albania, including, going clockwise from north, Montenegro, Kosovo, North Macedonia and Greece.

Reasons To Go To Albania

Where Have You Written About Cycling In Albania?

"I have travelled extensively in Albania over the past 5 years. By and large the people are very friendly and accommodating. The majority of the country is very mountainous apart from the plateau that runs from Tirana to Durres and down the cost. The temperatures during the summer soar into the high 30s so take plenty of water. Once you are in the country, accommodation and food is cheap until you hit Tirana where prices are a bit higher. You will also find that if you can't speak the language you will be charged a bit more for things.

"The roads over the past number of years have seen a significant improvement however their signposting is nearly non-existent apart from on their autostradas. Some of the roads at the moment are in a shocking condition so make sure that you have a lot of spare patches and inner tubes. Also the driving of the Albanians is far from the best as they certainly have no concerns about overtaking going into blind bends. You will see from all the road side memorials the large number of fatal crashes that they have.

"Also make sure that you take something with you that can help with upset stomachs as during the summer they tend to suffer from a lot of power cuts which effects food storage leading to a significant amount of food poisoning.

"It is still a greatly misunderstood country but one that is open and welcome to all that visit and you will find that a lot of pepole will come up and speak to you to practice their English." GavinRitchie

"When heading into Macedonia from Albania try to cross the border at Saint Naum cross point, which is named after the Saint Naum monastery near the border in Macedonia. You might sleep there as well.

"The entire Ohrid area is simply wonderful. You should stay there for at least one day and visit Ohrid's old town. Remains of Via Egnatia are still visible on the western side of the lake." alex-skp

"I cycled down to Albania from the north a few months ago, entering Albania at the border crossing near Lin and followed the road south on the western shoreline to Pogradec. Onto Maliq, Korce, Erseke and Leskovic before crossing into Greece. I thoroughly enjoyed Albania. Nice and friendly. Unspoilt and scenic. As cheap as chips. I'd love to go again." DaveFY7

"The people were so friendly, and really made an effort to welcome you. I admit to being a little apprehensive about cycling on my own but I loved it. I spent 3 weeks in Tirana, then went due east to Lake Ohrid, and crossed over into Macedonia - another awesome country!

"The north is very green. The interior is quite mountainous and some of the passes are quite severe, especially crossing over into Macedonia near Lake Ohrid. It's only about 2000ft high but it's a twisty and tight son 'o' a bitch but not as long as the Lake Ohrid pass up and over to Prespa. That took us 5 hours, but what a view, and no tourists.

"There's great camping around the lakes, otherwise there are no official campsites anywhere. Wild camping is OK, as long as you cannot be seen from the road, of course, otherwise the cops might ask you to move on.

"The roads were fine until I reached the suburbs of Tirana, then the road in was like a construction site, but don't let that put you off.

"The thing you must have is a bloody good map because they don't exist anywhere in the country. City maps, yes, but not for cycling in the hills. And carry loads of water, as fill-ups will be very few and far between. One word of advice: there are absolutely no spare parts for modern Japanese bikes, so take chains, tubes, spokes, in fact, the whole kitchen sink! However, the small, blue gas cannisters that we get in the UK are all over the place in Albania. toyotakev