Belarus In A Nutshell

Almost no one goes touring in Belarus. The last time I checked, only four of nearly 15,000 bloggers on crazyguyonabike.com had been there. And that's a shame because it's genuinely unlike anywhere else in Europe. I'm not sure what the thing is that you get from visiting Belarus - maybe your curiosity satisfied. It's like visiting a real-life communist zoo/museum except that there's plenty of food in the shops. C'mon, visit a dictatorship! 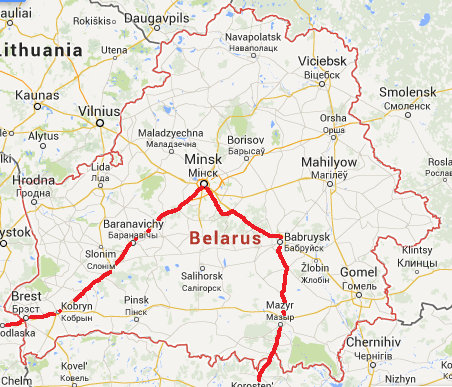 First off, you probably need a visa. Citizens of the following countries DO NOT need a visa for stays up to 30 days (and some of these countries are allowed to stay longer too): Azerbaijan, Argentina, Armenia, Brazil, China, Cuba, Ecuador, Georgia, Israel, Kazakhstan, Kyrgyzstan, Macedonia, Moldova, Mongolia, Montenegro, Qatar, Russia, Serbia, Tajikistan, Turkey, UAE, Ukraine, Uzbekistan and Venezuela. There's also a rule that citizens of other countries can travel visa-free for 30 days if they arrive and leave via Minsk airport, though this is not an option that will appeal to many cyclists.

I used Real Russia to help me get my visa. I recommend them. As a British national it cost around £80 for a 30-day, single entry, tourist visa in 2013.

I was privileged to have a great contact in the country. Without him, I wouldn't have been able to afford to go. Visa regulation changes in 2013 meant that I would have had to pre-book and pre-pay for official hotels for every night of my visa. Official hotels were in the €50-€100 per night bracket and few of them are likely to be on your route. (None were on mine.) This can add a lot of money on to the cost of your trip when you might have to pay for a second hotel for each night in addition. Upon entry to Belarus you are given a form that requires a stamp from each hotel in which you stayed. This seems to limit wild camping possibilities. I'm not sure how strictly the border officials check your form on the way out. My form was missing two night's worth of stamps as I stayed with my contact and no one said anything as I left the country.

You can possibly get around these restrictions if a local claims you are staying with them. I received a comment recently to say this person only needs to be a WarmShowers or Couchsurfing host. I'm not sure how true that is, or how easy it is to find such a host in a country like Belarus where people tend to be a little wary of foreigners, but if you can then that's your best bet.

Don't expect anyone to make conversation with you on the street. I was told they are suspicious and fear what they say may be used against them later. (Belarus still has the KGB after all.) If you ask for directions Belarusians are pleasant enough and usually happy to help. Hotel staff were friendly. Supermarket check-out girls weren't.

Belarus doesn't have any coins. Its lowest denomination note - 50 rubles - is worth approximately 1/2p. This makes for a lot of notes and a lot of noughts when dealing with larger amounts. (And think yourself lucky because a while ago they knocked off three noughts to make it easier.) Shops tended to expect exact change and with a load of identically-sized notes it's not easy to perform this task in the amount of time that staff are prepared to give you. Lacking any sense of real power, check-out girls can get a bit shouty when they smell weakness.

All the main towns I visited (20,000+ population) had cash machines.

Always pay attention to the existential advice given by the country's hotel fire notices:

Belarus is mostly flat. The landscape tends to vary between dense, dark - even oppressive - forests and huge swamps. It's a paradise, I tells ya. On the main roads it often feels like there are few towns of any size to break this up. Villages, when they exist at all, are at the end of tracks disappearing into the woods. The mood of the place varies between monotony and creepiness. 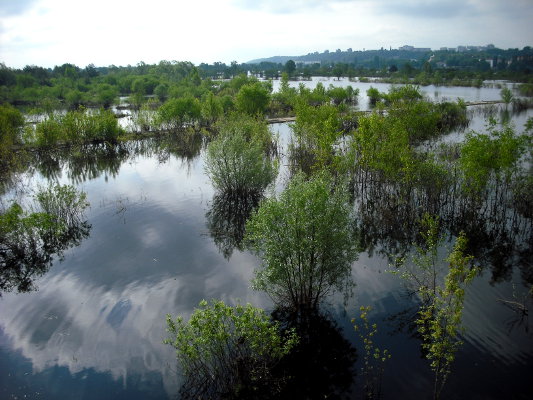 Surprisingly, the main roads in Belarus are better than anywhere in eastern Europe. Traffic was exceptionally light everywhere I went except close to Minsk. Drivers travel at sane speeds, unlike those in countries that border Belarus. The roads in towns, on the other hand, can be badly potholed. Minsk has a nice cycle path beside the river. It was a great place to watch the drunks getting a tan. 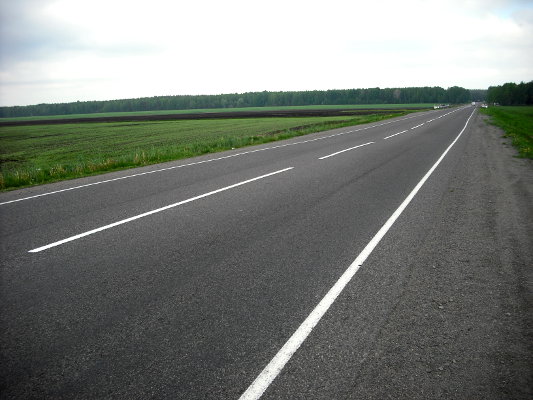 As far as I am aware there are no campsites anywhere in Belarus. Hotel prices vary immensely. Giving an average is pointless. I paid €7, €11, €15, €16, €19, €31 and €54. There was very little noticeable difference between any of the hotels. All rooms (except the €7 one) had a fridge, none had functioning internet and most had no hot water (including the most expensive). You'll only find hotels in large towns and there may only be one. On two occasions I was told a hotel was full when that seemed highly unlikely. I didn't stay at a hotel in Minsk but given the prices of other things in the capital I'd expect them to be disproportionately expensive.

Supermarkets were cheap enough. Western, grab-it-yourself places exist but there are still a lot of shops where the goods are behind the counter and you have to ask for them, with the resulting problems that can cause. Learn Russian or how to mime effectively.

Outside of Minsk, there are very few restaurants.

Petrol stations, the larger of which have a decent shop attached, are usually at least 30 miles apart.

To tour Belarus without at least attempting to learn the Cyrillic alphabet would be asking for difficulties. Even better would be to learn a few useful phrases in Russian. I can recommend Michel Thomas's Russian course. German may be useful. I was talked to in German by receptionists in three of the hotels I visited but only one of them could actually form sentences. So maybe it's not so useful. Outside of Minsk, no one I met spoke English.

Belarus provides plenty of options for onward travel, mostly to its former USSR buddies (clockwise from NW): Lithuania, Latvia, Russia (although if you aren't a local you cannot cross this border), Ukraine and Poland.

Reasons To Go To Belarus

A chance to see the last of its kind - a communist dictatorship in Europe - to be the only one of your friends who's ever been there, to make your passport a little more interesting, for the weirdness, for an interesting (rather than necessarily enjoyable) time.

Where Have You Written About Cycling In Belarus?

Q. I want to go cycling in Belarus but don't want to prebook hotels. Are you aware of any organised bike tours?

A: I would very much doubt it. Tourist infrastructure is minimal. Also, I did not see a single other cyclist in the whole country except on the cycle lanes of Minsk. I'm afraid that if you want to go then you'll have to organise your own tour. Sorry.

Q. How did you organise your accommodation?

A: The easiest way possible: I just turned up and asked in my woeful attempt at Russian. Miming usually works well too.