The Czech Republic In A Nutshell

The Czech Republic is the farthest point west where you can enjoy the delights of the former Eastern Bloc, with its interesting architecture, unpronounceable languages, hearty fare and delicious beer that's cheaper than water. If the undulating countryside isn't doing it for you, add in one of Europe's greatest capital cities. 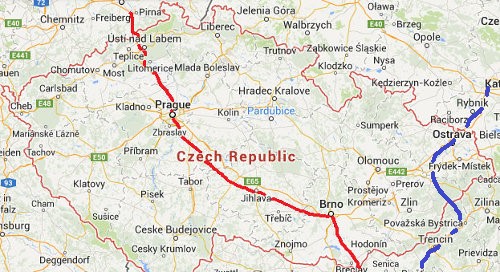 28th May - 9th June 2011
Dresden (Germany) - Decin - Litomerice - Prague - Benesov - Pelhrimov - Velke Mezinci - Brno - Mutenice - Malacki (Slovakia)
Late spring can be hit 'n' miss. I got a fortnight of lovely weather. The following year it rained so much that Prague was seriously flooded.

The Czech Republic doesn't really do breathtaking scenery - that's the job of Prague and its architecture - but it has a lot of rolling hills and the roads prefer to tackle contour lines perpendicularly. If there's a river you're more likely to cross its valley than ride along it, which means frequent steep downs followed by steep ups.

The Czech Republic's villages are usually prettier than its countryside. That said, there were some lovely hills in the east of the country. 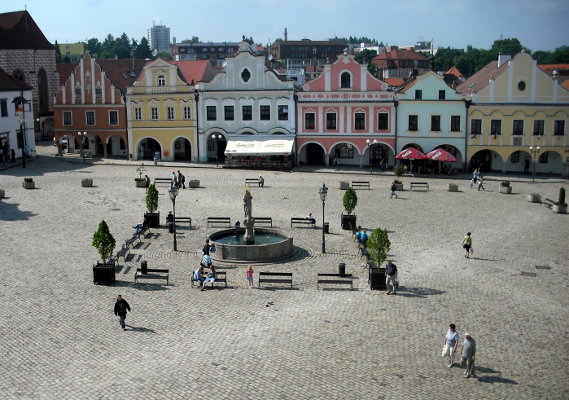 Outside of Prague, many of the Czech roads are quiet, but some A-roads are scarily busy and with no verge. Twenty minutes on one of those is enough to frazzle your nerves. Stick to B-roads if you can. Surface quality can vary from fine to ropey.

Although you see a lot of people on bikes, Prague is not a cycle friendly city. The centre is full of cobbles and tram tracks. The main roads, some of which have three lanes of traffic, occasionally have a cycle lane but have adopted the UK's system of adding one when there's room and removing it when there isn't, in other words providing a wheelchair when your legs are fine but kicking your crutch from you when you most need it. It can be fun and exhilarating or simply terrifying. It's also quite hilly in parts.

Ostrava, a city in the north-east of the country, has a terrible reputation for grimness, but I found it earthily charming and a welcome antidote to the tourist swarms of Prague. 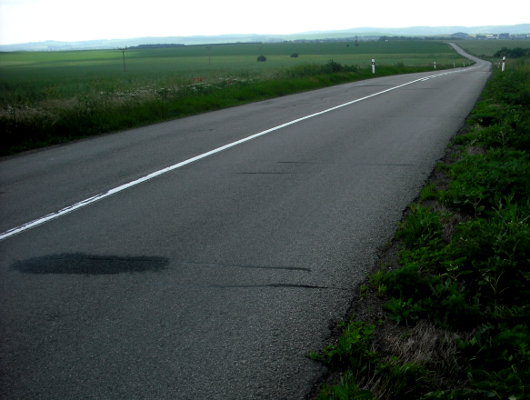 In 2011, hotels averaged €25 per night although they ranged from €12 to €38. My only hotel in 2018, in unfashionable but (in my opinion) funky Ostrava, cost €20. Weirdly, it had a toilet bowl in one corner of the bedroom. In 2011, my first campsite cost €5 and the one in Prague at a decent little site on Trojska (where several others are too), close to the tram stop to Prague centre, was only €8. In 2018, my only campsite, not near anything particularly cool and in the far east of the country, was itself €8. Maybe it was over-priced or maybe this non-Euro currency has suffered greater inflation than the euro, just because it can.

Where the Czech Republic scores highly is in its ability to feed and water you at very reasonable prices. Typically a large main course - pork and dumplings, or meat and potato cakes - and three pints of Europe's best lager came to €8. As a result there's no reason to stop at three pints.

Its neighbours are four places really worth exploring by bike: Germany, Austria, Poland and its erstwhile country-mate Slovakia.

Reasons To Go To The Czech Republic

Where Have You Written About Cycling In The Czech Republic?

"I absolutely loved cycling through the Czech Republic. Saw the bones church in Kutna Hora. All the secondary roads were almost traffic free, idyllic and great cycling. I'd be riding along and see an ancient castle off on a hillside and seek it out. The one thing I found in the Czech Republic, however, was that in almost every village I rode through, finding water in small shops to buy was virtually impossible, even in bottles that weren't in any refrigerator or cooler. All they had was beer, cold, hot, however you wanted it. But why would anyone want water sir, when you can have beer much cheaper? Prague left me breathless. I loved Prague and definitely want to return." Len DeMoss

"There are cycle routes everywhere, some of which are dirt tracks, so there's little need to cycle on big roads. From Brno, head for Olomouc (the Czech Oxford) rather than Prerov (the Czech Crewe). The main Brno-Ostrava long distance cycle route goes through a rather attractive hilly region north of Brno. Alternatively, there's a cycle route along the Morava river to Olomouc.

"Route 5 is the Czech national cycle network route from Brno to Ostrava. You can also buy specific cycling paper maps locally, at fairly reasonable prices by international standards. There are also free handouts available from tourist offices in areas that promote cycling.

"The Jeseniky mountains are a cyclist's paradise, if you like hills and traffic-free routes. There is also a good cycle route from Olomouc to the Jeseniky with a witchcraft theme.

"This website shows all Czech and Slovak cycle routes in detail: http://www.cykloserver.cz/ You have to go in very close to be able to see the cycle routes, so it's not much help for longer distance route planning.

In Search of the Long Legged Blondes of Eastern Europe
This link takes you to Len DeMoss's first day in the Czech Republic in 2013.