Georgia In A Nutshell

Georgia is making an effort to attract visitors and it certainly has plenty of assets. It's a low cost, high reward experience although it's a bit of a schlep for a European cycle tourist. 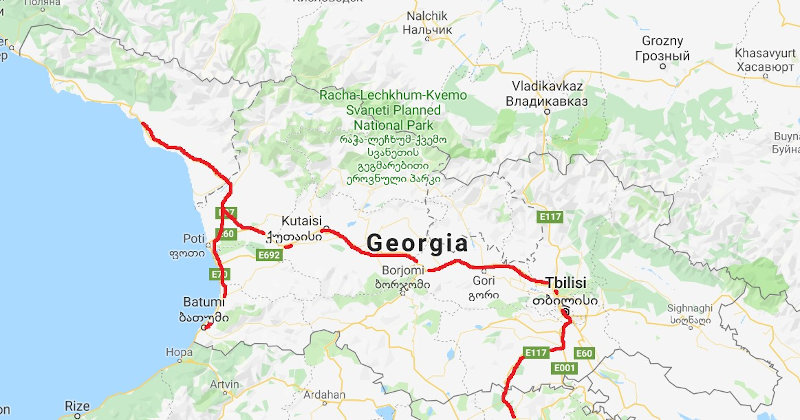 You no longer need a visa to visit Georgia. Just turn up. And unlike almost anywhere else in the world, you can stay for up to a year without further paperwork.

Georgia has serious issues, in the form of Abkhazia and South Ossetia, two breakaway regions backed by Russia that have been the cause of seriously deadly fisticuffs. You can visit Abkhazia with only a few hassles, even though the UK Foreign Office tells you not to - see the page for Abkhazia - but forget South Ossetia. No one gets a visa for that place. And besides, the only road into the region is via Russia and a massive tunnel, hardly cycle-friendly. Speaking of Russia, they have been sneakily moving the South Ossetian border fence further into Georgia under cover of darkness. With such an aggressive and unstable neighbour, if you plan to come here, keep an eye on the news.

While I unfortunately didn't manage to bike up the huge hill to Mestia where the real mountains are, I saw some utterly lovely ones from a distance. And there are some serious mountains here. Shkhara is, after all, taller than Mont Blanc. Even when I was away from the mountains, the scenery was almost always great. 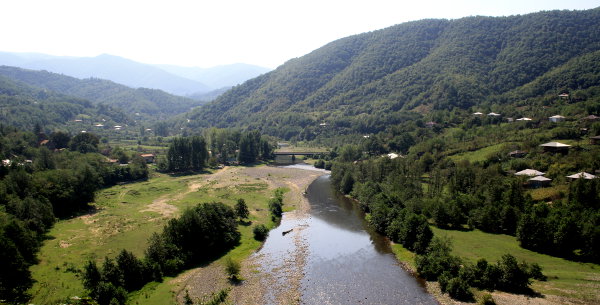 Georgian roads are generally acceptable but the standard of driving is atrocious. I witnessed several accidents, either live or the aftermath. And only about 20% of the cars don't look like they've seen some recent action at a demolition derby.

Although Georgia has tighter drink-driving laws than anywhere in Western Europe, from the tales I heard I'm not sure how much notice local drivers take of them or how effectively they are policed.

One road structure you might come across is the long and terrible tunnel. For a start, they are dimly lit. More problematic is that there's a walkway, usually raised by over a metre, meaning that swapping from the road to the walkway with a bicycle is challenging or, in busy traffic, suicidal. The walkway is narrow, especially when it is also home to reflectors every few metres, and usually constructed of badly broken concrete slabs. Deep holes aren't unusual. Take a bloody strong headtorch. The best thing I can say about them is that, if you survive and make it to the other side, you suddenly appreciate life a little more.

I had my cheapest ever hotel in Georgia at €5, although perhaps "hotel" is too grand a word. The sign outside said "hotel" but it felt more like someone's spare room. And there was definitely something alive in its walls. I'm not sure if they were insect- or mammal-based. But, y'know, €5 is €5.

I stayed in nine different hotels, ranging in quality from the above to a lovely old stone mill in the south of the country, and they averaged €18, ranging from €5 to €42.

I believe there are campsites in Georgia's mountains but I didn't see any.

Food is also very reasonably priced and it is something that Georgia makes a big deal about. Perhaps because of the hype beforehand, I was a little disappointed with some meals when I was there, but I did have some really great stuff too. Highlights include the often heavenly khachapuri, a sort of boat-shaped cheese pizza, but much more interesting than that description sounds, and khinkali, broth-filled mega-dumplings. Georgians tend to heavily use ingredients that are more sparsely employed elsewhere, like walnuts, pomegranate, caraway and blue fenugreek.

There is also a good case to be made for saying that early Georgians invented wine.

Georgia's alphabet is unique to itself, consists of 33 letters and is wonderfully and exoticly curly. For a visit of a week or four, you are unlikely to be motivated enough to learn such an alien script. I got by either with English or the few words of Russian I know.

Thank god for Georgia, otherwise the Caucasus would be completely out of bounds for border-crossing cycle tourists. That said, relationships are not always great, especially northwards. Neighbours include Armenia, Azerbaijan, Abkhazia (although every Georgian will tell that this isn't a separate country), South Ossetia (ditto) and, the cause of all their woes, Russia.

Reasons To Go To Georgia

Because it's much easier than it used to be, it's cheap, there are serious mountains, (usually) great food, friendly people and khachapuri.

Where Have You Written About Cycling In Georgia?