Kosovo In A Nutshell

Kosovo is worth a look if you are in the area although Pristina doesn't have much to offer and the capital is expensive compared to all those around it. There's still a bit of trouble every now and again but generally it's a safe place to visit. 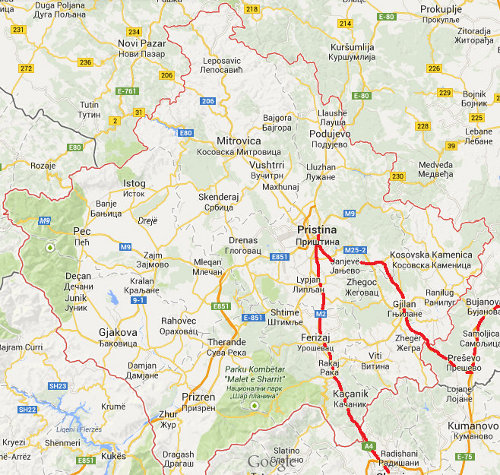 The UK Foreign Office still advises against visits to the Kosovar municipalities of Zvečan, Zubin Potok and Leposavic, and to the northern part of the city of Mitrovica. My route avoided these areas.

Land mines are scattered around although they've been cleared from all roads and tracks. Wild camping isn't such a great idea.

The Serbia-Kosovo border crossing near Vranje was pandemonium with dozens of people huddled around the border guards' huts and no one moving in either direction. Unable to determine a system I just cycled through and waited for someone to stop me. They did, checked my passport and I was done in five minutes. On other days though you might get shot.

Kosovo has pleasant countryside. Its town are less appealing. 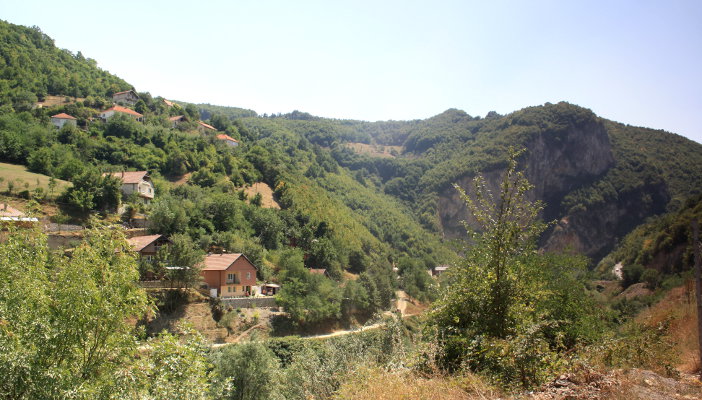 I only stayed at one hotel in Kosovo, an over-priced hole in Pristina costing €75.

Beer prices around Europe are generally proportional to the country's GDP. Whereas a pint is somewhere around the €1 mark in the countries around Kosovo, a 33cl bottle at a cafe in Pristina cost €2.50 and this in the second poorest nation in Europe. I've no idea if prices outside the capital are similarly steep, relatively speaking. I suspect not. A huge plateful of kebab, salad, chips and rice from a roadside restaurant near Gnjilane cost only €3.

Town signs are written in Albanian and Serbian. In many cases, depending upon the local majority, one of these has been spray-painted out. Since the Serbs and Albanians are genetically identical and you won't be able to tell just by looking, don't risk it. Start in English and take it from there. German might be useful too.

Reasons To Go To Kosovo

Curiosity, to annoy your Serbian friends.

Where Have You Written About Cycling In Kosovo?

We skipped Priština and, on advice, headed straight to Prizren. What a wonderful town. The people are so friendly (even though we knew no Albanian and communicated in Serbian!), food was fantastic and so, so cheap. Perhaps the biggest surprise in Kosovo was how good the roads were, especially after the terrible state of the roads in Serbia, from Niš to the border.