Morocco In A Nutshell

It's a shame. Morocco could very nearly be the perfect winter cycling destination - and maybe in summer too if you have asbestos skin - but there are just enough niggles to rob it of any utopian claim. We'll get to those in a minute. But it does have some of the most glorious scenery you'll see anywhere on Earth, and if you're looking for a budget-friendly expedition, you should definitely consider it. 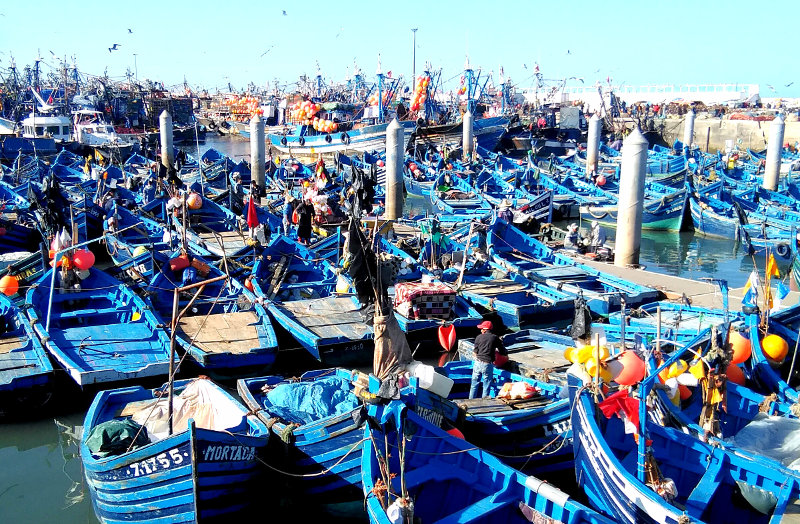 The busy port at pretty Essaouira 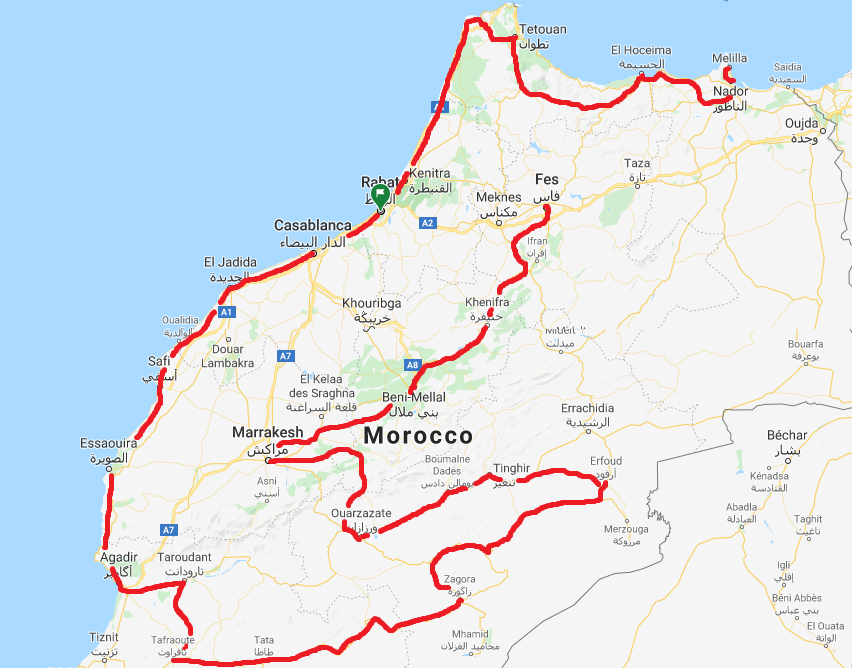 If you ask anyone for help of any kind, or anyone offers help of any kind, assume that you are paying for it. Someone who casually chats with you near a medina, asks you where you are from and then follows along is now your guide, at least as far as they are concerned. This can be extremely annoying. If you do want showing around - and in some places I suppose it could be useful, especially if you are a woman travelling alone - negotiate a price right away. Since these types of guide are illegal, you will be able to get a good price, especially if you remind them of that fact. Personally, I'd rather they left me alone.

Expect to be lied to often. Your guide will make up stuff rather than admit he doesn't know. Any sort of lie can be told to sell something to you. If you go into a butcher's and tell him you're looking for a hammer, he'll sell you a rack of lamb and tell you it does the same job.

Food hygiene is just something for other countries. Corner shops often have bread counters. The normal behaviour is for every single customer to sort through and touch every single loaf before selecting one that looks identical from the bottom. Assume that your home-made sandwich contains the sum total of a village's bacteria. Obviously, this is even more of a concern during these plaguey times.

I went to Morocco specifically to take a break from alcohol. Unless you're doing the same, you need to know that outside of the big cities, and even in some of them, it's difficult to get hold of it. In the big towns, the only dependable sources are the larger Carrefours, but only outside of Ramadan. Snazzier hotels that cater for Westerners will also usually have booze available. Only one of my sub-€40 places did and that was because it doubled as a seedy bar.

If you've come to Morocco for the drugs, you're in the right place. They will be offered to you endlessly. But beware - they are illegal everywhere except an unpoliced section of the Rif mountains. And if you are travelling with someone you don't know too well, be aware that it is also illegal to be with someone who possesses drugs even if you are entirely unaware of this.

And while we are on that subject, there are police roadblocks everywhere. I usually saw at least two or three a day. None of them stopped me - maybe I have an honest face - but they might stop you and if you have drugs on you then please contact me a few years from now and let me know what it's like inside a Morocco prison.

If you like quirky things, frivolous fun, museums full of pointless but amusing tat, or anything unserious, then Morocco won't help you. It's mosques and kasbahs all the way. Yeah, they look good, as does the scenery, but Morocco is definitely light on stoopid shite.

Morocco's stereotype of dune-filled desert is a bit misleading. It does have them if you're prepared to put in the miles, but you'll probably be sick of sand before you get there.

Morocco has many different faces, almost all of them gorgeous, from the rugged Atlas, to the wave-battered Atlantic coast in the south (further north the coast is mostly a mess), to the famous gorges of Todra and Dades, to the greener hills of the Rif mountains and the often flat scrubby desert, which is beautiful in a less definable way, in between.

Scenery is where Morocco scores highly. 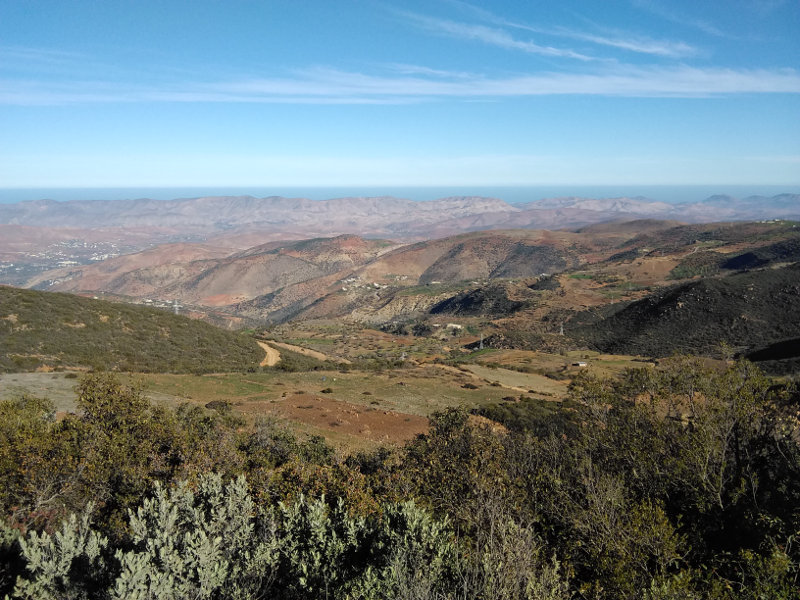 From the Rif mountains, looking to the Mediterranean 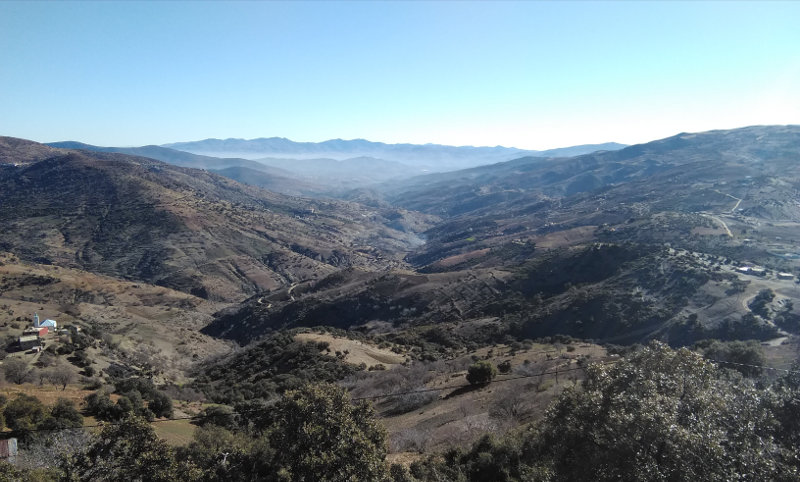 And looking the other way, towards the Atlas Mountains 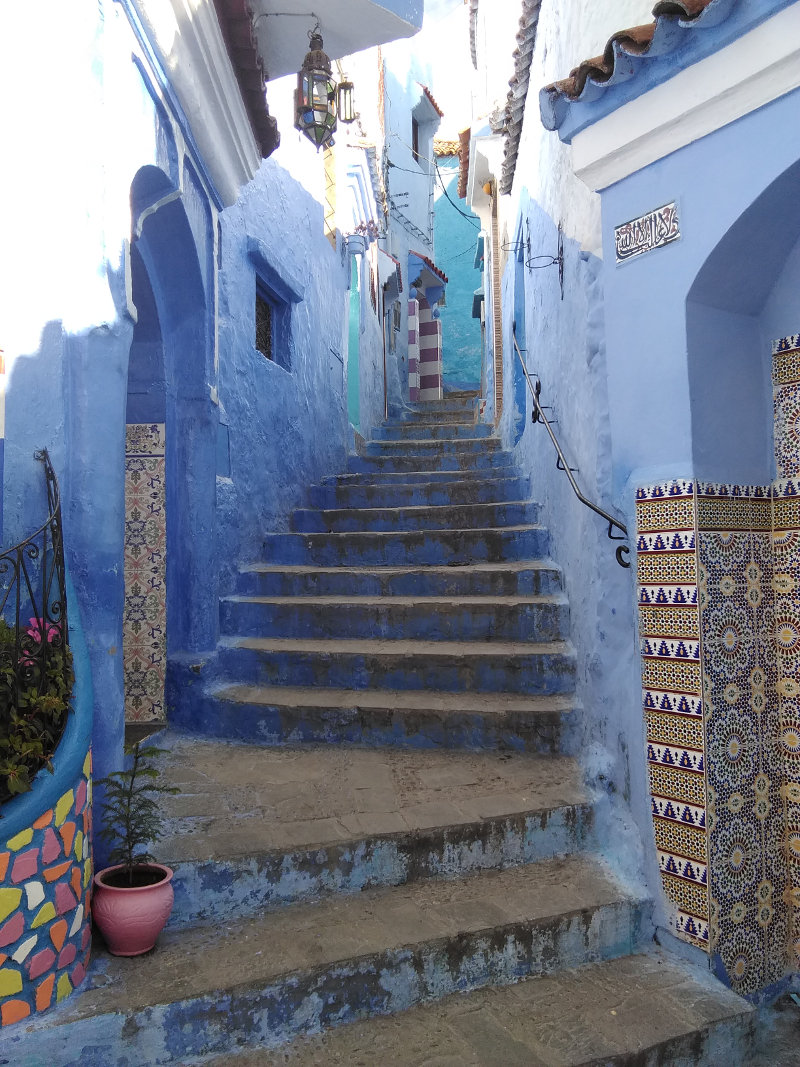 The Blue City of Chefchaouen

Mostly they are fine. Many of the older pistes have now been asphalted, not always beautifully but definitely adequately. On the day I passed over Tizi n'Tichka - supposedly North Africa's busiest pass - traffic was relatively light. In some parts of the desert, the cars pass so infrequently, you'll feel like the last human on Earth.

Morocco's road death statistics are more than a little worrying, but I rarely saw terrible driving. 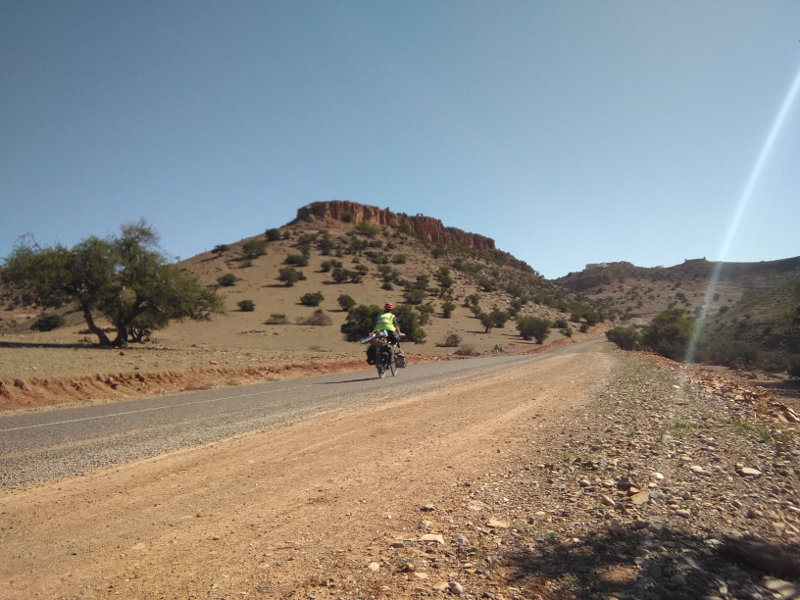 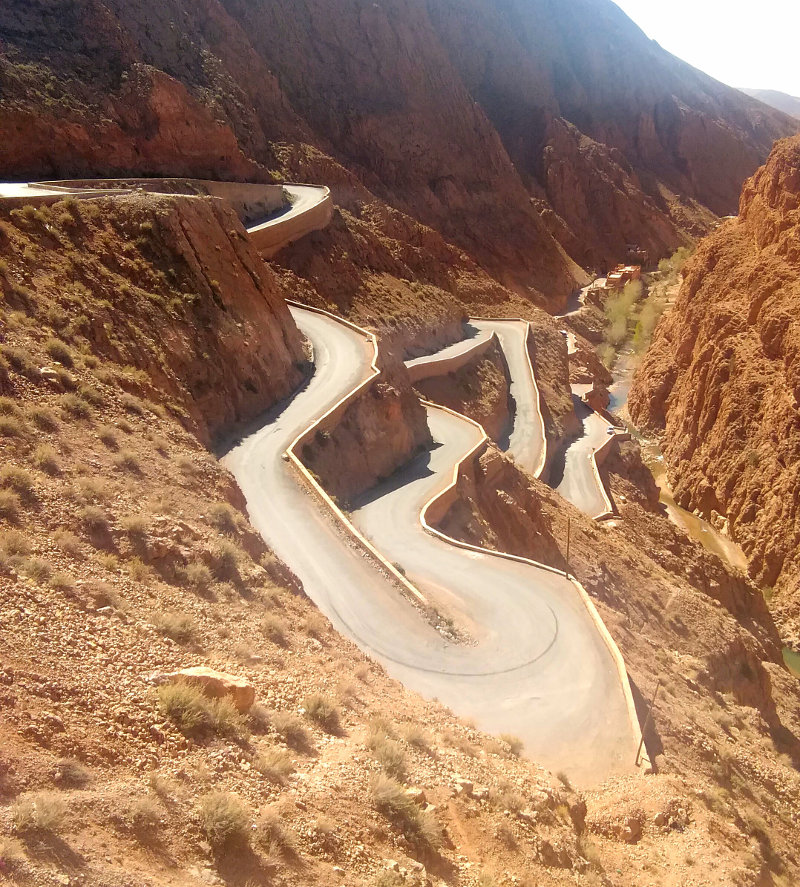 A chance to stretch the legs in the Dades Gorge

My 44 hotels averaged €17, which included a handful of unnecessary but enjoyable splurges. It was also the country with my cheapest hotel ever at €4 a night, and there were several others in the €6-10 category, many of which were in the beautiful, budget-friendly but possibly dangerous Rif mountains. In all but the most popular large towns and cities, getting somewhere in the region of €10-15 wasn't difficult. In the most famous ones, go up to €20. And remember, I travel alone and usually go for a private bathroom, although this isn't always possible.

Camping ranged from €2-7. IMPORTANT: You will need a free-standing tent. Most sites are not only lacking in grass but also a surface into which pegs can be hammered.

You'll also almost certainly need a free-standing tent for any wild-camping you do. Options are not as plentiful as you might imagine in the desert. Often the surface is simply rocks and the flat ground beyond the roads means you'd have to push for miles to get to a point where you'll be hidden from view. But it's doable with patience. I only wild-camped twice.

Morocco's food is a lot more hit and miss than you might imagine. If you want western pizzas and stuff then you'll be fine in the tourist cities, but these are the places where you should avoid tagines and cous cous dishes which were often bland as hell. Not only do they usually lack any sort of spice, but also salt. Maybe if you go to top-end restaurants, they are a lot better, but then again you'd be paying the same price as you do back home.

Where Morocco scores highly is in its street food, although this might not be for everyone. A staple is viande hachee - minced meat - formed into a shape and grilled, stuck on a bun usually with some salad and a side portion of chips. A meal-sized portion usually costs around €2. For the more adventurous, if you're prepared to try offal, you'll get some delicious liver, kidney and occasionally even spleen sandwiches. This last one was my favourite.

For more specific recommendations, I had a camel's head sandwich in Rabat that will live long in the memory, as well as snail soup, sheep's head and the world's best roast lamb all in Marrakesh. 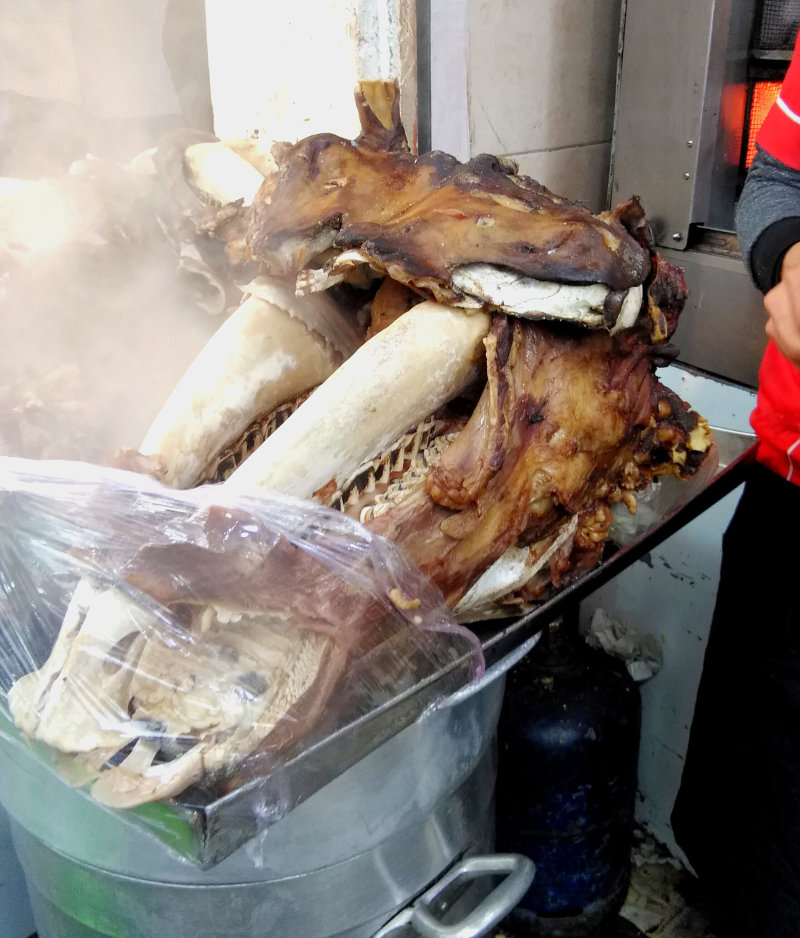 A delicious camel's head - you don't eat the whole thing

Vegetarians and vegans will survive but since salads are usually the source of most food poisoning incidents here, you might find yourself losing a lot of weight.

Bread is available everywhere and usually costs around 10-15 pence/cent for a 20 cm-diameter round. It's tasty but goes stale quickly. And other people will already have touched it, but that's Morocco for you.

Outside of the big tourist resorts, where English is spoken, it's time to polish off your school French. That said, although French is an official language, it's not spoken by everyone. Unless you're prepared to invest considerable time in learning Arabic and several of the Berber languages, you will find yourself falling back on miming. Don't worry though. If you're buying, they'll find a way to sell to you.

Onward options from Morocco are a bit limited unless you leap across the Med to Spain, but that's probably the direction you came from. Morocco's border with Algeria has been sealed for decades. To the south is Western Sahara, which Morocco claims as its own, although no one else agrees, and then it's on to dusty Mauritania and the rest of Africa.

Reasons To Go To Morocco

Scenery, winter sun, street food and its budget-friendliness are the four that leap to mind. If you must finish the day with a beer, it's probably not the location for you unless you end every ride in a large city or at an over-priced hotel.

Where Have You Written About Cycling In Morocco?