Nagorno-Karabakh In A Nutshell 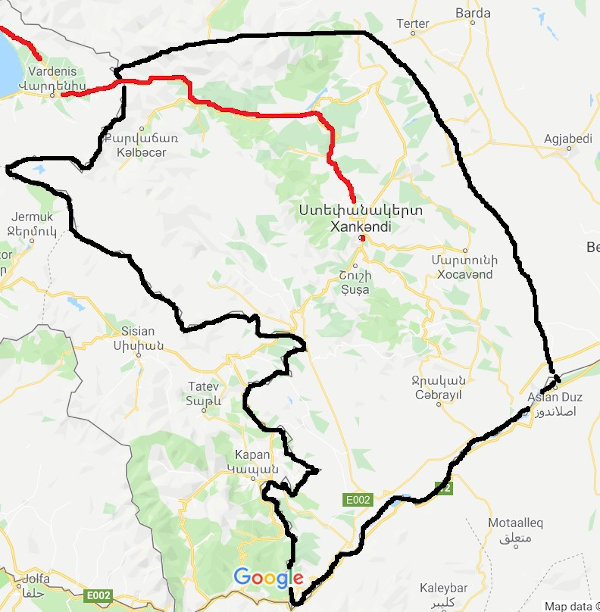 Nagorno-Karabakh is known locally as Artsakh. For the sake of my fingers and your bandwidth I'll stick to that name from now on.

Artsakh, ethnically Armenian, is at war with Azerbaijan and has been since the USSR fell apart. There is an uneasy official ceasefire, but it kicks off from time to time. The last major incident was in 2016, with both sides losing close to 100 soldiers and 10 civilians each. It's easy to avoid the frontline but, obviously, if there were ever a much bigger flare-up, anywhere could become the frontline.

Roadside hardware, out of commission

Important: The UK Foreign Office and the equivalent US department tell you not to come to Artsakh under any circumstance. Foreign countries do not have representation here. If you get into trouble, then you are on your own. I did my research and calculated the rewards were worth the risks. If you're planning on visiting, you must do the same. Please check online for current tensions.

Whereas I didn't want to be seen to actively encourage visitors to similarly dodgy Abkhazia, I do sort of want to encourage people to come here because, provided you don't mind hills, adventurous cycle tourers will love this place. It's gorgeous. And whereas the people in Abkhazia were generally indifferent, here they were extremely friendly. Only here did a couple of polite twelve-year-old kids come up to me and welcome me to their country.

At the time of writing, it is difficult to determine where Artsakh actually is if you look at Google Maps (the ones I use for this site). Since no one recognises its independence, Google presumably doesn't want to mark it on the chart and piss off Azerbaijan. I have added my own clumsy approximation of the boundaries of the place. For Christ's sake, don't use this map in any serious way. Confusingly, even for English language users, Google Maps uses the squiggly Armenian alphabet and also alternative but more legible Azerbaijani names. On the map, the capital Stepanakert is rendered as something like Xenkendi.

You cannot enter Artsakh from Azerbaijan, only Armenia. There are only two routes into Artsakh. The original entry point leaves Armenia near Goris. A more recent, northern route from near Vardenis over the 2,400 metre Sotk Pass is the way I entered. Since the northern route supplies the frontline with troops and weapons - I didn't see any - the road has been recently improved and is as good as any road you'll find anywhere.

I can't comment on the Goris entry point but at least at the Sotk entrance there is no obvious border. You cycle over the pass to the first village, a few miles into Artsakh, where you'll see a roadside booth at which you register. You then supposedly have 24 hours to buy a cheap visa in Stepanakert, the capital. But this poses a problem for any cyclist less able than Superman. Stepanakert is about 120 miles away and over serious mountain territory. This road also has almost no accommodation. I met one guy who planned to wild-camp, but he would have had to take his chances with uncleared mines, which isn't ideal. (I did see him still alive later.) I decided I would cycle 100 miles with 3,000 metres of ascent and stop - totally knackered as daylight faded - at the only hotel I could find en-route, the edge-of-nowhere Ani Paradise, almost ironically named given its facilities. But at least it existed and could provide cold beer. I continued on to Stepanakert the next morning. The Ministry of Foreign Affairs didn't seem to mind that I was a day late. 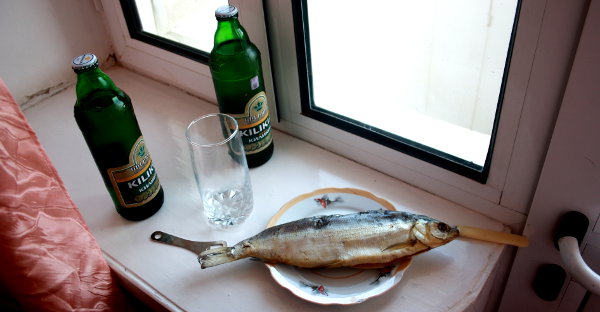 The only food the Paradise Hotel had was this massive, stinky dried fish. At least they also had cold beer. Yes, I drank more than you can see in this photo.

Important: If you visit Artsakh you will not legally be able to visit Azerbaijan in future. Since Artsakh doesn't stick its visa into your passport, how would Azerbaijani authorities know that you'd visited? That's your choice if you want to risk it and find out. I wouldn't. Azerbaijan can be a little...er...prickly.

By the way, I'm not mad. Cycle tourers do come here. On my way in, I cycled behind a French fella and as I minibused it out of the place via the Goris road, we passed a couple of cyclists coming in. But not many people have it on their touring resumé, which is a shame because it deserves to be there. But I would totally understand if it's not for you.

Rows of hills and mountains, sparsely populated except for a handful of towns. It is wild and beautiful. My amateurish photos can't do it justice.

Just over the Sotk Pass 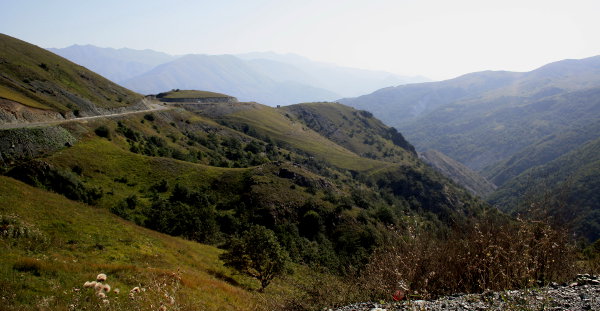 A little further along 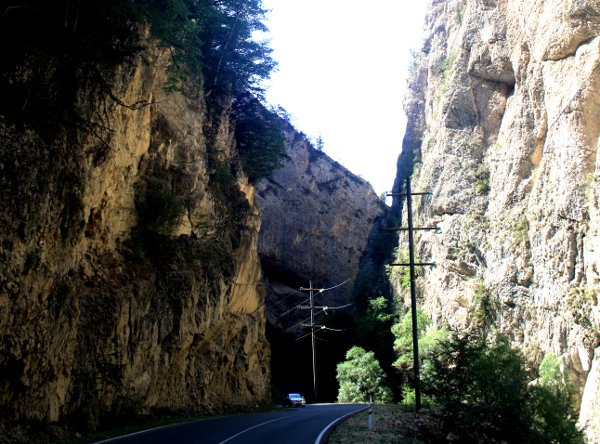 Through a gorge. See that car? That was an anomaly. 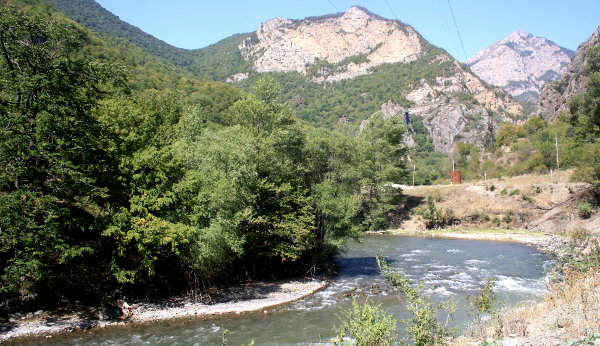 Row upon row of ever paler mountains 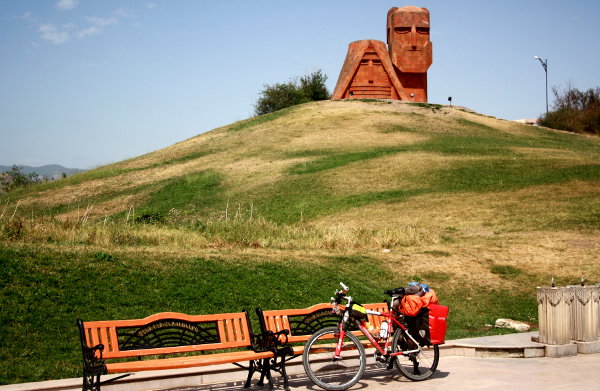 The bike beside Artsakh's national symbol

The currency is the same as Armenia, the dram.

Be extremely careful if you plan to wild-camp. One beautiful lakeside area had signposts warning of mines. I wouldn't assume that unsignposted areas are without mines. Personally I wouldn't wild-camp here. It isn't worth the significant gamble.

The hotel I visited on my first night, about 20 miles short of Stepanakert, cost €14. I can recommend the friendly, basic but comfortable Raffo and Karine's Guest House in Stepanakert for €20.

It's cheap to eat out in Stepanakert and you have a choice of several restaurants.

Visit the tiny phone-box-sized tourist office and sign the poor woman's guestbook before they make her redundant. I was the only one in her book that day.

I don't speak any Armenian but the guesthouse owners spoke good English, as did people who stopped me in the street except for one old bloke to whom I squeezed out my entire five-word vocabulary of Russian.

N.K., as the cool kids call it, has two neighbours, Armenia and Azerbaijan, but unfortunately the Azerbaijani border is the front of a war and you can't cross there. And you probably wouldn't want to in any case.

Reasons To Go To Nagorno-Karabakh

Because it's gorgeous and wild and sexily forbidden or, more prosaically, because you're still writing that book about independence-seeking regions (see Biking Broken Europe if you're interested).

Where Have You Written About Cycling In Nagorno-Karabakh?