Slovakia In A Nutshell

Slovakia is a great bargain destination with some stunning scenery. The High Tatras are magnificent. Bratislava is an up-and-coming capital too. 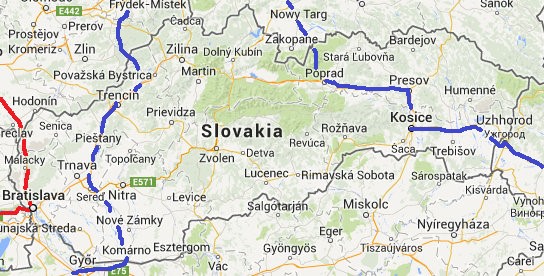 The bit I saw in 2011 was flat and, Bratislava aside, entirely uninspiring. In 2018 I saw a lot more of the country and it has some truly great cycling. I mostly cycled around the Tatras rather than through them but a future cycle tour is calling me to see the mountainous middle of the country.

It also has some attractive towns. Bratislava is worth a look whether or not you're on a bike and I also liked Trenčin, Levoča, Prešov and Košice.

Food and beer prices are very low. A tasty cabbage soup with smoked sausage and then pork goulash, sauerkraut and dumplings with two pints came to just over €7.

The guy on the desk at the hotel outside of Bratislava told me his only foreign language was Russian. More English was known in Bratislava as well as German, not surprising given that Austria is just around the corner. The younger people I ran into in 2018 spoke great English.

Czech Republic, Poland, Ukraine, Hungary and Austria. If going to Ukraine, check that the border crossing allows bikes. There is at least one (the one near Uzhhorod on the 19/E50 road) that doesn't.

Reasons To Go To Slovakia

Cost, Bratislava (which in the last twenty years has morphed into a really attractive city), the gorgeous Tatras, tasty food.

Where Have You Written About Cycling In Slovakia?

"I rode from Prague to Krakow a couple of year ago. The ride through the Tatra Mountains is great and the roads were quiet. We mainly camped and the prices were very good especially the ice cream - 50 cents for proper ice cream! Food was what I expected from Eastern Europe, piece of meat, potatoes and if you wanted some veg it was cabbage. The Foreman's Needle, a large lump of pork on a piece of fried bread. Most camp sites have a kitchen area with sinks and electric cookers. They also have some reasonably priced small challets (sheds) varying in age and quality if you didn't want to put your tent up. Maps were not great as often it looked like you should go straight across at a junction but when you get there there was just a 'T' junction. You then had to ride up to 800m in each direction looking for the 'straight across' road. Also every other bridge seem to be under repair when we were there. We started to look for diversions and then realised you could just follow the locals straight through the middle of the building work." Anonymous

"Slovakia is a good place to cycle with quiet roads of a decent standard. The Lower Tatras are largely forested so views can be limited but the climbs are decent. The Higher Tatras are very scenic. We spotted a large wild cat on our first trip over." DaveFY

"Heading due east from Liptovsky Mikulas you have the broad depression between the Low Tatras to the south and the Western and High Tatras to the north. It gradually climbs over a watershed before you drop down to Poprad. However, overall it gives the impression of a plain and isn't very interesting, though the distant views of the Tatras are nevertheless reasonably spectactular.

"To make the ride more interesting you may want to keep to the northern edge of it and cycle in the foothills of the Western and High Tatras through Strbske Pleso although you can't actually cycle in among those mountains as it's footpaths only. And actually once you get to that road along the foothills, you get a bit too close to the peaks to see what is going on.

"Avoid Poprad unless you really need to visit a giant supermarket. They are easily found on the main routes in on the western edge of town. The town itself is mostly an industrial, communist-era dump. About 40km further east, Levoča is one of the most historic towns in Slovakia." iviehoff